Video: Drag Queen Beaten by Two Woman But Puts UP One Hell Of A Fight 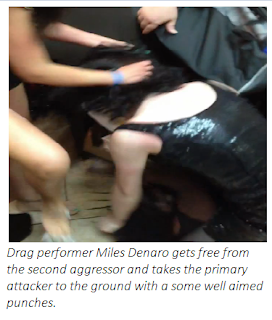 There have been four recent attacks in the DC metro area, an assault on a drag performer, two shootings one involving a trans woman one resulting in the death of a lesbian and a stabbing of a trans woman. None of these crimes are being investigated as hate crimes by the police.

One attack, the beating of a drag queen by two woman was filmed by an antagonist and posted on line. In the beginning of the attack it is clear the drag queen, Miles Denaro, was acting defensively and would have avoided the altercation if not further provoked. Incredibly the police are not pursuing this as a hate crime, rather they are making the victim out to be the aggressor!

The Washington Blade reports that one of two women shown in a video posted online punching and kicking a gay male drag performer while pulling him by his hair inside a D.C. carryout restaurant has filed a police report accusing the man of biting her leg and telling her “now you have AIDS.”

The report given by the woman, which D.C. police made public Tuesday afternoon, was the latest development stemming from an incident early Sunday morning, June 23, at Manny & Olga’s pizzeria on 14th Street, N.W., in which Miles Denaro, 24, says he was attacked by two women who called him a “tranny” and “faggot.”


If you are unable to stomach the asshole egging the fight on there is a mute button...

According to Denaro, no one, including about six Manny  Olga employees, came to his aid during the assault. Denaro said he chose not to call police at the time of the assault. He filed a separate police report on Monday, June 24, accusing the two women of assaulting him. He told the Blade the assault began after one of the women made fun of his makeup and words were exchanged between them, prompting one of the women to slap him in the face twice. “Then I flipped out,” he said. “I spit in her face and her friend jumped in and they started dragging me around by my hair while punching me in the face repeatedly and kicking me,” he said.

The police report taken from the woman, who is identified as Rachel Manna Sahle, 22, of Gaithersburg, Md., classifies her biting allegation against Denaro as a felony aggravated assault that carries a maximum sentence of 10 years in jail.


The police report taken from Denaro classifies the assault by the two women against him as a misdemeanor simple assault, which has a maximum sentence of six months in jail and/or a fine of $1,000. Police spokesperson Gwendolyn Crump said police would have no comment on any details of the case because it remains under investigation. No arrests had been made in the case as of Wednesday.