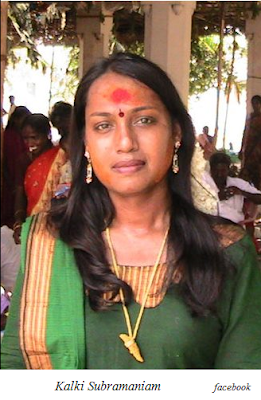 Indian Transgender activist, singer, dancer and actress Kalki Subramaniam was attacked June 2nd while in route to her home in Auroville, near Puducherry India. Subramaniam was riding her moped when two unidentified men begun following her on bikes. When she crossed a unlighted section on the Karuvadikuppam bridge on East Coast Road the men sexually assaulted her ultimately pushing her to the gtound.

Kalki told Times of India "When I reached a dark spot, they suddenly came very close to me, sexually assaulted me and pushed me down onto the road. My moped was damaged and I was hurt in my left arm and right foot and was bleeding," said Kalki, who played the lead role in the film 'Narthaki' (embedded below), which won international acclaim. Kalki said her assailants fled soon after pushing her down. "A foreigner, who was passing by, came to my help," she said.

Subramaniam tried to report the attack at the Auroville police station but they refused to accept it saying she needed to know who the attackers were first. The police have denied that was the reason for not taking her claim saying they were unable to process Subramaniam complaint becuse she was unable to name the location of the attack.

Subramaniam responded to this on facebook "What an irresponsible answer and a lie it was for the police officer to say this to the press? I am a victim assaulted. Even if what they said was true, isn't it their responsibility to help me to find the place where I was assaulted?"

Perseverance paid off shortly later Kalki posted a facebook status update: "Finally, my FIR registered, promises made by the top level officers to take actions as soon as possible. protection for Auroville women assured with more police patroling and monitoring around Auroville. I believe, the crime prevention measures I recommended will surely be in action soon."

Kalki Subramaniam is founder of the Sahodari foundation empowering India's transgender community who's latest project teaching journalism would be very frightening to those who would desire our community's continued subservience. The world of transphobic haters need to know this, transgender people are one, united world wide. When you attack one of us you attack us all.

Kalki's lead roll in the critically acclaimed movie Narthaki is of great importance to the transgender community. The traditional role of transgender people in India's ageless culture validates our existence to pre biblical times.

The story begins with Kalki (Kalki) a transgender who is a classical dance artist, recounting her life's story to a journalist.

Her life begins in Vilar, Thanajavur, as a young boy Subbu (Aswin), the son of a Silambam exponent (Karate Venkatesh) and a home-maker with a keen interest in dance. The boy grows up watching his mother, drawn to feminine adornments, and dresses.

He first discovers his attraction to his own sex as an adolescent, in itself an awkward episode. His cousin Meena (Leema) tries to engage his affections, but has no success. Matters explode when Subbu's parents come to know of this, and the boy, thrown out of his home, runs away.

It is after this point that the story actually picks up pace. You're shown the terrible strain faced by a young man who's confused by his sexual identity, and finds refuge with others like him in Mumbai. His gradual transformation into a woman, the pain he undergoes, both physical and mental, and his embracing of his identity is shown in neat and touching detail. A new world is thrown open to you, and it's a fascinating, although depressing, one.