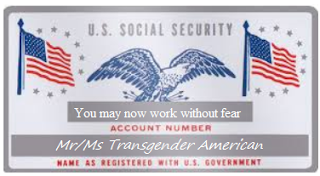 I went to the Texas SSA office on a hot Friday August afternoon in 2007 on a mission. My terminal manager was getting pressure from the main office to correct a discrepancy in an employees records. My record. I am a MTF whose gender was unrecognized by the SSA. Within a month his requests had turned into a demand. I had to get the SSA to stop sending the payroll department gender"no match" letters or risk losing my job.

I had been able to change everything except my birth state, Ohio, does not amend or reissue birth certificates for transsexuals. Since I was pre op and couldn't produce proof of SRS I was left with only one option. A friend had told me I might be able to get the change through on the QT, as she did, if I did it as directed. So I passively, submissively  approached the SSA window after a short 3 hour wait, smiling in my most pleasant feminine way and explained what I wanted.

Well long story short the clerk produced the regulation denying my gender marker change a couple of hours later and I left unsuccessful and soon to be unemployed. A couple of years later after Obama was elected he directed the SSA to stop sending out those no match letters, but that was too late for me. I lost a $900 a week job because of that bureaucratic bullshit.

And I know I'm only one among thousands of trans people who have had their jobs put in jeopardy thanks to a government which seemed to not care.

I have great news! My brothers and sisters, you will not have to become unemployed and homeless as I did to satisfy that antiquated bureaucratic rule.

According to The National Center For Transgender Equality as of June:

Social Security will accept any of the following forms of evidence for a gender marker change:

You can view the official SSA regulation here.

Email ThisBlogThis!Share to TwitterShare to FacebookShare to Pinterest
Labels: SSA

There are times when we’ll grow disappointed by the existing laws that the government has implemented, but there are times when they’ll also adhere to some needs of the constituents. It's nice that you already fixed your SSA membership. This will give you the chance to insure yourself and invest in the SSA’s insurance plans. I hope that this good news will continue until the time that you'll need it most.

Simply want to say your article is as astonishing. The clarity in your post is just cool and i can assume you’re an expert on this subject. Fine with your permission allow me to grab your feed to keep up to date with forthcoming post. Thanks a million and please continue the rewarding work.
Boston social security disability lawyer