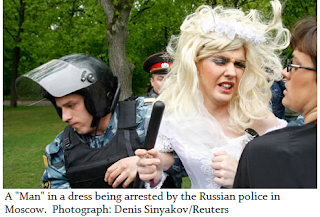 The growing parallels between Hitler and Putin's charade duping world leaders, who are all to willing to pretend there was nothing so wrong with Nazism or Putin's Anti LGBT laws that a Boycott of the Olympics would have been necessary, is well, mind boggling. Nothing has changed, with the Olympic committee or world leaders who remains more concerned with ego and prestige and cooperate connections than human rights.

The biggest difference between then and now is social media in the free world where Russians are calling for a boycott. 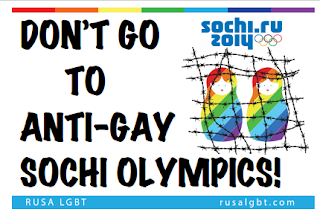 The state sanctioned violence against LGBT people has increased to the point where if a LGBT person stands in public with a sign proclaiming themselves as such, they face arrest and beatings by both the public and the police. That same treatment on a day to day basis can now be expected by anyone who visits Russia.

Are world leaders going to send their Olympic team members to Russia knowing that legally they can be arrested, and fined? I am sure they will if Putin temporally suspends enforcement of those laws, just like Hitler did. Unless we as a world social power unhindered by international borders stop the Olympics from happening by embarrassing our governments with these undeniable truths. 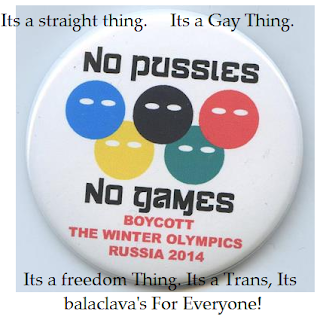 I hope a rallying point can be the cry to free Pussy Riot. Two of the four brave young band members aren't set to be freed until after the Russian games. Everything else that Putin could do to coerce the world to play his games would be worthless if these pussies were to remain in jail while Putin played.

Please consider adding your name to the petition No Pussies No Games: Boycott / Demonstrate at The Russian Winter Olympics

International Olympic Committee warns Russia over new anti-LGBT law
In the wake of a legal crackdown on LGBT advocacy in Russia, the International Olympic Committee in a statement this week said the 2014 Winter Olympics in Sochi "should be open to all, free of discrimination, and that applies to spectators, officials, media and of course athletes," adding that it would strongly oppose any move to counter that principle. Some worry new laws against LGBT propaganda could subject foreigners to jail and deportation if they are caught holding the hands of same-sex partners or wearing LGBT Pride symbols. Windy City Times (Chicago) (7/17), GlobalPost.com/Rights blog (7/18), The Huffington Post/Gay Voices blog (7/11)

There has even been a law passed in the Duma crimilizing hurting someones 'religious feelings'. We aren't talking about a Muslims feelings, or a Jewish persons feelings. This law was enacted to protect the Russian Orthodox's feelings after Pussy Riots famous Cathedral protest song.


Although there was been some discussion whether this video is authentic it is the first video in year from Pussy Riot.