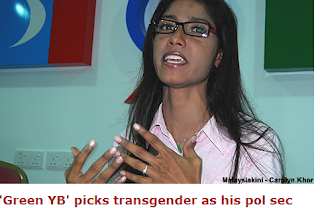 In possibly a Malaysian political first, a transgender woman Hazreen Shaik Daud, has been appointed as political secretary to DAP's Tanjung Bungah state assemblyman Teh Yee Cheu. The decision's received backlash but Hazreen's determined to help "Ubah" or change the mindsets of the public toward her community.

Malaysia has become known as a very hostile country for trans people even banning movies in which LGBT characters don't repent or die symbolizing "good over evil".


In Malaysia cross-dressing is not technically a crime. However, transgender individuals have often been arrested by police officers under the civil laws governing "public indecency", and if they are Muslim, can be further charged by religious officers under Sharia Laws for "impersonating" women. For example, in 1998, forty-five Muslim transvestites were charged and convicted in court for dressing as women, and twenty-three more transgender persons faced similar fines and imprisonment in 1999.[3] In 2012, a court upheld the ban on Muslim born males wearing women’s clothes. The High Court in Seremban rejected a bid by four Muslim transsexuals who were born male to declare the Shariah law unconstitutional.[9]
It has been estimated that a large number of transgender persons are forced to work on the streets as commercial sex workers to earn a living.~ Wiki LGBT rights in Malaysia

A transgender committee was initially approved in the Penang State to address transgender issues:

The transgender committee will be formed in two months, and aims to collect data and alleviate the status and social stigma associated with the transgender community. Some of their activities will include public forums to spread awareness on the issue.

Hazreen will initially work in the committee but she will also be responsible for other issues as well such as politics, economy, culture, education, health, and human rights.
KiniTV, a Malaysian Internet portal, recognized Hazreen as Malaysia’s first transgender in politics:
Read more at global voices online.org

Activists in Malaysia have today launched the first transgender awareness public service announcement video of its kind on Youtube.
read more about this at Fridae Asia

This educational video campaign is specifically designed to raise awareness regarding the trans* community, in hopes to foster understanding and promote tolerance and acceptance in this society towards trans people and subsequently bridge the gap between the trans* community and the society.