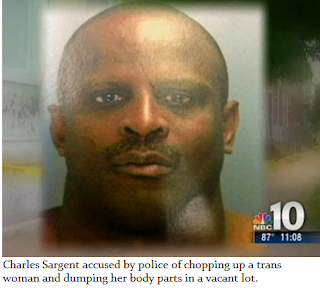 Police believe Strawberry Mansion resident Charles Sargent used a axe to dismember a transgender woman allegedly telling his girlfriend he 'discovered' the victim was a 'man' after sex.  According to police Sargent's girlfriend heard noises upstairs and when her boyfriend came down he had the victim's body wrapped in bloody bed sheets warning her that if she said anything he would kill her too.

The police searched Sargent's home and found a wig, shoes and a bloody screw driver.
Sargent didn't get the memo, Transpanic is a lie not an alibi.

UPdate: Police have identified the victim