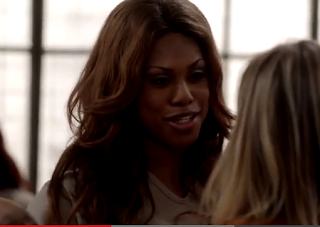 Buzzfeed reports Cox, who shares an acting coach with Nicole Kidman, plays Sophia, a trans woman who, pre-transition, was a firefighter. In the third episode, guest-directed by Jodie Foster, we learn about her complicated relationship with her wife and son. “I don’t know of a trans character on television played by a trans person that has as much humanity as this character,” Cox says. It’s true. Generally, trans folks are portrayed as tragic or heroic, but Sophia is multidimensional and complex, part hard-won confidence, part sweet underbelly.

In one flashback scene, we see Sophia’s wife help her into a dress early on in her transition, and the pained tenderness when they kiss is palpable (Cox says Foster was so moved by the scene that she came out behind the camera with tears in her eyes). Later, when Sophia is cut off estrogen in prison for bullshit bureaucratic reasons, her panic — over not only the hair appearing on her chin, but also the serious medical issue of not having any hormone production in her body — is a nuanced portrayal of a pretty universal fear for trans people who take hormones, but one rarely discussed outside our communities.

From the A compelling, often hilarious, and unfailingly compassionate portrait of life inside a women’s prison

(Based on the memoirs of Piper Kerman) who was sent to prison for a ten-year-old crime, she barely resembled the reckless young woman she’d been when, shortly after graduating Smith College, she’d committed the misdeeds that would eventually catch up with her. Happily ensconced in a New York City apartment, with a promising career and an attentive boyfriend, she was suddenly forced to reckon with the consequences of her very brief, very careless dalliance in the world of drug trafficking.

Kerman spent thirteen months in prison, eleven of them at the infamous federal correctional facility in Danbury, Connecticut, where she met a surprising and varied community of women living under exceptional circumstances. In Orange Is the New Black, Kerman tells the story of those long months locked up in a place with its own codes of behavior and arbitrary hierarchies, where a practical joke is as common as an unprovoked fight, and where the uneasy relationship between prisoner and jailer is constantly and unpredictably recalibrated.

Revealing, moving, and enraging, Orange Is the New Black offers a unique perspective on the criminal justice system, the reasons we send so many people to prison, and what happens to them when they’re there.