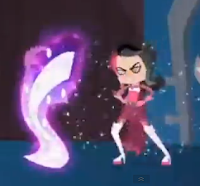 "One Million (60,000) Moms" is all twisted about a cartoon show that dares to challenge male dominance by transforming a boy into a female super hero. Wait, aren't mothers woman? Why wouldn't woman be ecstatic about a cartoon which empowers there daughters?

Ok, I'm not a cartoon fan. I don't even own a TV because I can find so many constructive entertaining things to do with my mind when it's not in neutral zombyfied and vegetative, but this cartoon wasn't just funny it was unique. Yes, I'd watch it if I had a TV.

Not everyone agrees with me on that though. A bunch of men masqurading as woman on Facebook as "One Million Moms" for instance.

The email One Million Moms Transphobes is sending to the Hub Network:

As a parent and a member of OneMillionMoms.com AKA as the AFA, I am deeply concerned about the new program called "SheZow." I am disgusted that your network produced a show with a transgendered superhero character. Hub network is being irresponsible and causing great damage to our culture.

I am appalled that Hub intends to air a show that portrays cross dressing in a positive light on a kid's channel. I strongly encourage Hub to drop all plans to air the program "SheZow."

This superhero character will be confusing for kids. Children desire to be just like superheroes and love to mimic a superhero's every action, even to the point of dressing up in costumes to resemble these characters as much as possible. It won't be long before little boys are saying, "I want to be a girl, so I can help people and save the world!"

My family plans to avoid the network all together so there will be no chance of viewing a commercial that promotes this vulgar program. Since Hub (Discovery and Hasbro) decided to produce this offensive program, you leave conservative viewers with no other choice. I hope you will reconsider and drop all plans to air this program.

I look forward to your response

SheWOW! "One Million (60,000) Moms" have transformed themselves magicly into the highly patriarchal, misogynistic male dominated AFA, who by there very nature would find it abhorant that a lowly girl could challange there authority.

That's funny. They could make a cartoon out of that.

Email ThisBlogThis!Share to TwitterShare to FacebookShare to Pinterest
Labels: One Million Moms, Shezow

I love when Uneducated people try bashing a cartoon that they know nothing about.
To help clear their tiny little minds.
The boy who uses the ring to turn into SheZow is NOT transgender, Is not gay and is not really a cross-dresser... WHY? Well because he did not willingly want to be a girl or wear girls clothes and he does not like boys.
The only thing this cartoon shows is a boy who found a magic ring that turns him into a super hero and it just so happens to be a Women's super hero ring...