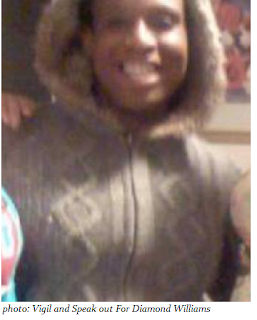 Police believe Strawberry Mansion resident Charles Sargent used a axe to dismember transgender woman Diamond Williams allegedly telling his girlfriend he 'discovered' the victim was a 'man' after sex. According to police Sargent's girlfriend heard noises upstairs and when her boyfriend came down he had the victim's body wrapped in bloody bed sheets warning her that if she said anything he would kill her too.

There will be a Vigil and Speak Out for Diamond Tuesday 23rd  from 5:30 until 6:30. Find the details here and at the Facebook event.

Vigil and Speak Out for Diamond