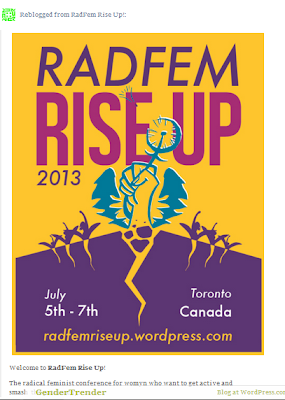 "The conference had planned to provide a forum to participants and presenters such as Rachel Ivey and Lierre Keith, both who espouse extreme hate toward transgender women and sex workers. As well the conference had been hosting radical feminists who have engaged in harassment, bullying, dehumanizing language, stalking, outing transgender teenagers online and blaming us for the violence we experience."

according to the Radfem Riseup website the new location will remain secret: "The address of the venue will be sent to each individual participant after she registers."

Beaver Hall Gallery just released emails stating that it will no longer host the conference:

“Beaver Hall Gallery is a space within Beaver Hall Artists’ Housing Co-operative, where artists and their family members both live and work. The gallery is managed and staffed by volunteer members who live in the housing co-op. When gallery events may affect the entire community of the co-op, the Board of the Co-op is required to make determinations in the best interest of the co-op members.

A final decision has been made by the Board of Directors to not host RadFem Rise Up! at Beaver Hall Gallery this coming weekend.

While we realize this news is disappointing for some, we hope that all parties concerned will respect and understand the decision.

It's a great day when hate groups are denied venues in result of our advocacy. Great work.