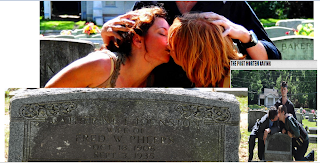 Disclaimer: I'm not a devil worshiper or even an admirer. As a matter of fact the devil is my enemy.
Claimer: I just got to admire these folks regardless of the differences in our spiritual beliefs. They are upstanding Americans which is more than I can say for the WBC.
(have they ever offered to clean up a highway?)

Source The Gauntlet "This past Sunday, July 14, top officials from the New York-based Satanic Temple traveled to the grave site of the mother of Westboro Baptist Church founder Fred Phelps in order to stage a formal ceremony celebrating same-sex unions. Photos of the ceremony are publicly available on the new Satanic Temple-operated website, westboro-baptist.com, where The Satanic Temple encourages other same-sex couples to submit their own photos from similar pilgrimages to the Mississippi cemetery."

"The Westboro Baptists, famed for their bombastic "God Hates Fags" anti-homosexual activism, raised the ire of the Satanic Temple months previous. "The idea for the Pink Mass ceremony and website came during the aftermath of the tragic Boston Marathon bombings, during which time the WBC were threatening to protest the funerals of the bombing victims," explains Greaves. “Members of The Satanic Temple were in Boston, waiting for them, but they failed to show. Later, the WBC issued a statement that they had been present 'in spirit'. We decided that a same-sex couple celebrating ceremony at the grave-site of Fred Phelps's mother was an appropriate way to meet the Westboro Baptists, 'in spirit', but this time on our terms."

"Explaining the ceremony itself, Greaves continues, "The Satanic Temple now believes that Fred Phelps must believe that his mother is now gay, in the afterlife, due to our Pink Mass... And nobody can challenge our right to our beliefs."

"This revelation of The Satanic Temple's graveyard ritual comes fast on the tail of the Westboro Baptist Church’s announcement that they intend to picket the death of 31 year-old "Glee" actor, Cory Monteith."