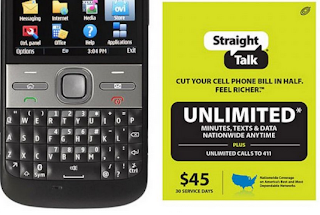 This is slightly embarrassing, not something I would normally discuss in public. I used to hide my cell phone when I was among friends. I didn't want anyone to see it.

See, I used to use the cell phone service "straight talk". At the time I worked at Walmart and couldn't afford ATT or T-Mobil service. Like many under employed trans people I couldn't afford Internet at home so the "Unlimited" plan seemed just what I needed.

Except my phone wouldn't open up links a few days after I re-up'd. (bought another $45 service card). Being ignorant I always assumed it was just a lousy phone/service but as it turns out the "Unlimited" plan wasn't unlimited at all. In fact it was another Walmart screw job.

The complaint against Walmart Stores and TracFone Wireless, which jointly created Straight Talk in 2009, says that the advertising claim is false, and that customers are routinely subject to having their flows of data "throttled" (slowed) or to having their access to data terminated without notice.

Throttling takes place, according to the complaint, when subscribers near or exceed "internally established, but undisclosed" data usage limits, or when the strain imposed on wireless networks by peak data usage requires easing.

The complaint says customers who objected to being "throttled" were blamed by TracFone service reps for having misused the data service, without being told how they had allegedly misused it.

As an example, the suit cites Northern California wireless customer Edward Tooley, who switched to Straight Talk's unlimited plan from a competitor's plan that expressly limited him to 2.5GB of high speed data, above which ceiling his data would be throttled.

Well, now I use Metro PCS (which is still slightly embarrassing siting amongst my S4 phone friends) but at least they let you know you have a throttle down point, but since I have WiFi at my house it really doesn't affect me.

But I'd really like to get in on this class action suit.