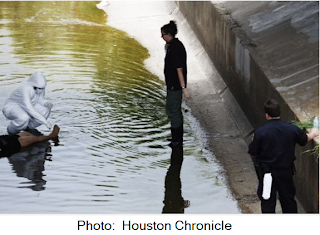 In Monica Roberts back yard. The Houston police are awaiting the autopsy of a "man wearing what appears to be a black dress and panty hose" who was found in 3 inches of water at 4100 Antoine in Brickhouse Gully about 8:15 a.m. on Sunday July 7.

This is not a high crime area and yes it does "appear" she was wearing a dress.

The person was assaulted sometime late Saturday or early Sunday morning. The body was discovered by two young people who waved down a motorist who in turn called the police. The two young people then left the scene and are not believed involved in the murder but are being asked by the police to come forward and speak with them none the less.


A phone call to the Houston police public affairs office has not been returned as of this posting. If you have information please call the HPD Homicide Division at 713-308-3600.
Posted by planet trans at 10:53 AM