Pvt. Bradley Manning's trial nearing the end. So why is the mainstream press mainly silent? 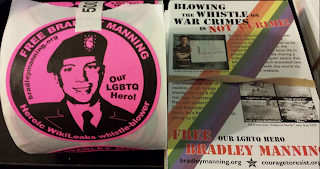 The judge will announce the verdict as early as Monday yet there are only few mainstream media articles about it.

Army private Bradley Manning purportedly came out to his commanders as Breanna and has paid the price while in Marine Corps custody in Quantico. Although his web page defines his gender as male and asks people to refrain from speculating about his gender the article's title does not state this implicitly unfortunately leaving many like myself unaware of his wishes. I researched this issue extensively before publishing because it is extremely important not to misgender anyone.

I apologize for unintentionally misgendering Bradley and have made the necessary corrections.

For nine months he was at Quantico he was stripped, slept naked, mocked and made to stand formation with other prisoners while naked.  USA today report Dec 2012 makes me wonder if his major offense was declaring himself trans to his superiors. This happened before DADT was repealed at a time when being trans was considered being gay and from my experience as a vet, the worst crime a soldier could commit. It got you three month's restriction to the barracks while waiting court martial.

FORT MEADE, Maryland (AP) — A former supervisor of the Marine Corps brig that housed an Army private charged with sending U.S. secrets to the WikiLeaks website denied Wednesday that he was making light of Pfc. Bradley Manning's homosexuality when he referred to the soldier's underwear as "panties" in a staff memo.

Marine Corps Master Sgt. Brian Papakie testified as a prosecution witness on the seventh day of a pretrial hearing at Fort Meade, near Baltimore. The hearing is to determine whether the nine months Manning spent in Marine Corps custody in Quantico, Virginia, amounts to illegal pretrial punishment, and whether his case should be dismissed as a result. The military contends Manning had to be confined to his cell at least 23 hours a day, sometimes without clothing, to prevent him from hurting or killing himself during his confinement from July 2010 to April 2011.

Papakie testified on cross-examination about a memo he wrote after the brig commander ordered Manning stripped of his underwear each night starting March 2, 2011. Manning stood naked at attention for a prisoner count the next morning, causing a stir that prompted Papakie to write an email to ensure it didn't happen again.

"Make sure he is not standing at attention naked for evening count right before taps. You should be taking his panties right before he lays down," Papakie wrote.

Under questioning by defense attorney David Coombs, Papakie said he uses the word interchangeably with "skivvies" and "underwear" when discussing men's undershorts.

Marine Corps Master Sgt. Brian Papakie fucking lied under oath. As a veteran Army Sargent I find that repugnant. Now I would have never considered doing what Manning did but I served during peace time long before Drones slaughtered innocent civilians and by remote control.

Her crime? Among other things this video: The RPG? It was latter identified as a camera lens. They slaughtered a journalist and parents carrying weapons to protect there children in a war zone.


So who is Bradley Manning? According to his father (who appears to be lieing) and a friend she suffered awefully as a young person.

Watch The Private Life of Bradley Manning on PBS. See more from FRONTLINE.
Posted by planet trans at 10:56 AM