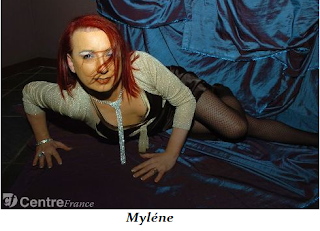 Thursday evening firefighters responding to a call from friends found  Mylène, a transgender woman in her Couzeix residence around 8:30 apparently the victim of an attack. Couzeix is a commune in the Haute-Vienne department in the Limousin region in western France.

According to Gay Star News  Mylène,42, was beaten to death with a hammer but the article does not include a link supporting that.

From the article's update on Friday it appears the police have arrested one person in connection to her murder.

From the article linked below "Mylene police still looking for key witness" which misgenders her.


"An appointment made on the internet and gone wrong, could be the cause of the death of this 42 year old hairdresser, appreciated for transmutation performances he gave in nightclubs in the area."

"But according to our information, the police is also investigating the guests at a party hosted Mylène Wednesday night, just hours before his death. Investigators seek such a man considered a "key witness" in the case of voluntary manslaughter. It would be left alone with the victim in the late evening and could be the last to see him alive."

"An autopsy will be performed at the Forensic Institute in the coming days to determine the exact circumstances of the death of Mylène, further clarified the floor of Limoges."