Can The Taiwanese Gov't Revoke A Marriage With A Letter? 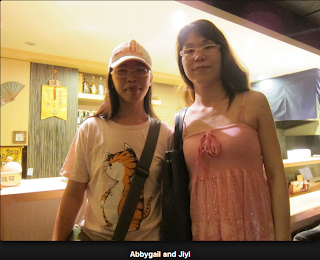 In May 2013 Taiwanese citizen Abbygail a transgender woman, won a ground breaking legal battle to marry her partner, Jiyi Wu. This gave hope to the Taiwanese LGBT community as it came just months after a gay couple gave up their challenge to marry.

Their  marriage would seem like  a dream come true, a happily ever after scenario, so why did the government of Taiwan annul their marriage just weeks after recognizing it? The couple, Abbygail Legal name Yi_Ting, Wu吳伊婷), and Jiyi, legal name: Ji-yi, Wu 吳芷儀 are bringing a powerful team in there quest to contest this ICCPR violation of human rights. 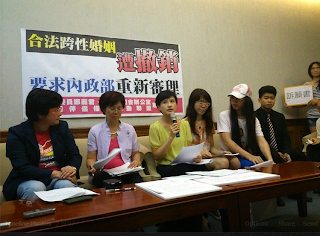 Abbygail in a interview with planetransgender explains why the government is reacting the way it has and what they intend to do about it.

"First of all we got married in Oct. 2012, so why we can get marry but other same-sex (sex in law) couple can't? Because after our SRS in July,2012, I change my official gender first , so we become "opposite sex" and get married. Jiyi changed her official gender after that, that's how the magic happened."

"In the official explanation of the "marriage validity for person do SRS and change official gender after marriage" few years ago, the ministry of interior claimed "if the marriage registration is taken place when two people is 'one male and one female' , the marriage will keep valid."

One gay American blogger wishing to make a point that transgender people need to support marriage equality said Abbygail and Jiy "unwitting" became marriage equality advocates. But as a trans person I knew there much more to this story, a trans human love story, so I asked Abbygail if it was simply a Faux pas on there part:

Abbygail explained: "So how did the government find this out? It's because when Jiyi tried to apply to change "official gender" in Oct. 2012 after our marriage, one of the director in the Household Registration Office noticed her SRS is done before the marriage ( the date on the certificate). He remain uncertain about the effectiveness of our marriage, and send the official letter to his upper administrative offices. This is how the story begins." 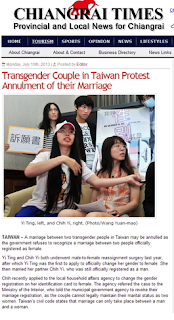 "The government claim that although our legal gender is "a man and a woman" at the marriage registration, but we both "physically" woman because the SRS is done."

"Jiyi said: It feels like asking the ID card is not enough, and also put a hand into your underwear. It feels violation."

"unwittingly", yes, it might be. But base on the diversity of gender, what's our gender? female? We can't have babies. male? we aren't. We are in the somewhere of the "gender spectrum".

"I like to quote and change some words from the movie I recently watched and enjoyed -- "Now you see me":

"Look closely, because the more gender boundary divided you think you are, the less gender you will actually see."

"For legal change, We certainly hope the decision can change and we and other friends in the ISTScare and TAPCPR think we should have a "protection law" which can help to protect human rights for the gender diversity people."

"For the worst scenario, if the government is still want to revoke the marriage and the appeal is lose in the court, we will ask asylum to the "marriage with gender-centralize" countries, because the country we belong is not capable to protect our rights, the first country on the list is US and then UK(base the the info from ILGA website , UK grants asylum on the basis of gender identity.)"

"We choose to stand out because we know "nobody can know more and ask more clear about our rights, we need to stand our and tell the world and change it. Don't be afraid. If you are more afraid, more rights can be lose"

Same sex marriage movement is somewhat outside of the trans agenda, even resented by some (like myself)because of the resources consumed in the LGBT equality effort, but it remains important to us. More to some of us, than others. ( like those in love:)