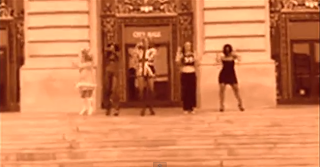 San Francisco CA Via the Castro Biscuit "July 20th, in an ‘only in the Castro’ kind of moment, Sister Risque of the Sisters of Perpetual Indulgence, aka Christopher Nathan, celebrated turning the big Four Oh by assembling some gal pals, memorized all the choreography and words of 90′s mega-Pop group, Spice Girls hit, ‘If You Wanna Be My Lover’, and then trooped around in man-sized 4″ heels serving the Castro classic flashmob moves at several iconic neighborhood corners. Filmed by Sister Risque’s pal Mark Kleim the look-a-like crew terrorized and entertained visitors and neighbors alike. Check it out. And happy birthday Sister!"

Vladimir Putin's killers have been trained to celebrate LGBT love but in a different way. The 2012 St Petersburg pride happened just as the city passed the "gay propaganda" laws. It went off peacefully. This year the gay propaganda law was enforced by police who allowed and participated  in the beatings of the LGBT people.


36 Photos From Russia That Everyone Needs To See

3. What began as a peaceful march…

5. A gay rights supporter is beaten to the ground.

6. Smoke bombs are set off.

8. A woman runs from the crowd.

10. …but are eventually detained.

11. In the end, police officers detained several of the gay activists.

13. That event was also overrun by anti-gay protesters.

17. Gay activists end up being detained.

21. The activists were protesting a new “gay propaganda” law. The law would introduce steep fines and jail terms for people who promote homosexual “propaganda” to minors.

24. …as gay rights activists were pelted with rotten eggs.

26. The same thing happened at a “kissing protest” in January.